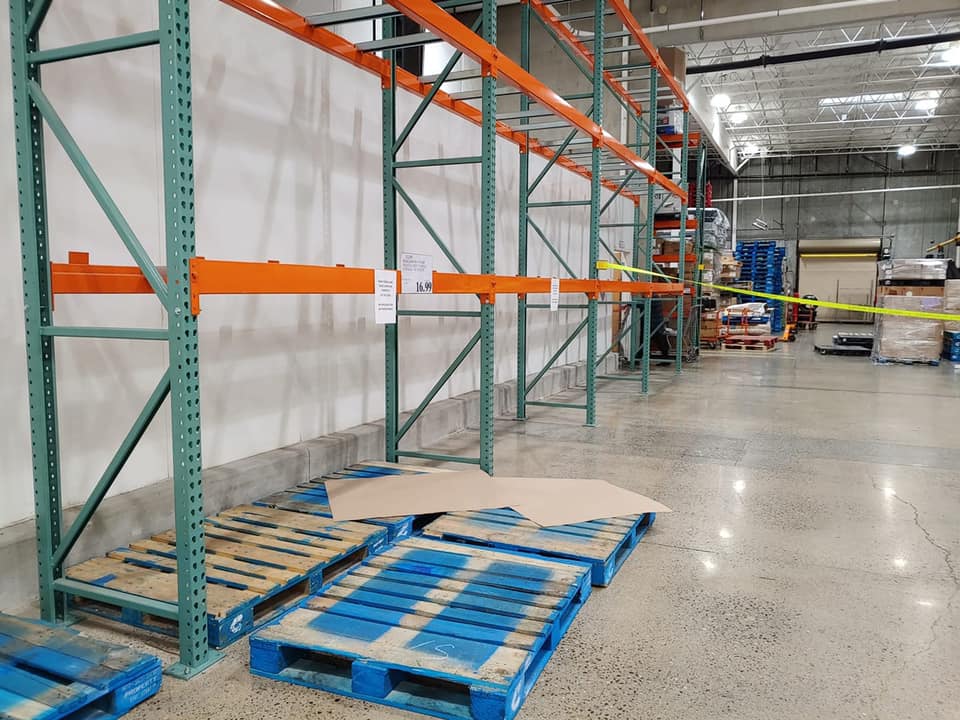 Over the past week, Washington State media has been filled with news reports on the novel coronavirus.  Federal, state and local officials have been providing the public with updates on the spread of the virus and who it will most likely impact.

Officials have suggested that the public limit contact with other individuals to slow down the infection rate and indicated that canceling large public events could occur in the future.

As could be expected, these announcements have led some Washington residents to prepare in case they need to isolate in their homes to protect themselves from the virus.  As a result, retailers across the state reported they were running out of many necessities, including bottled water.

The picture above was taken this past weekend at the Kirkland Costco (just a couple of miles away from Evergreen Hospital where several coronavirus patients have been taken).  The picture shows the warehouse retailer’s shelves were stripped bare of bottled water as just a small percentage of the public decided to prepare themselves for the worst-case scenario.

Meanwhile in Olympia, many Washington Legislature observers were questioning a recent action by Senate Democrats that would prohibit new bottled water facilities from opening in the state.

As the Democrats rush to prove their anti-business, pro-environment credentials, many liberal senators lined up to support SB 6278 sponsored by Senator Ruevan Carlyle (D-Seattle).  The bill would prohibit issuing new water rights to commercial water bottlers.  Plainly stated, this bill would forbid any new commercial water bottling operation from operating in Washington State.

It should be noted that there have been a couple of recent attempts by water bottling operations to open facilities in Washington, but they have failed due to local authorities denying the companies the necessary permits to extract water from local sources.  Senator Carlyle’s bill would prohibit new water bottling operations even if local communities were willing to sell the rights to the water because they wanted the revenue and the jobs the commercial operation created.

SB 6278 was one of the first bills the Washington State Senate voted on in the 2020 legislative session and it was passed along party lines 28-20 on February 17th.  The legislation then moved to the House where many people predicted it would also pass and then be signed into law by Governor Inslee.

Yet, since the legislation’s passed in the Senate, the coronavirus situation was becoming more serious and people began to speculate whether the Senate’s ban on future bottled water operations was an overreaction and could impact the well-being of the state’s citizens during an emergency.  With the real small possibility of people wanting to shutter themselves away from public contact and stockpile necessary goods, the banning of new water bottling operations in the state was becoming a questionable action.  The current public demand for bottled water may have killed SB 6278.  The latest reports out of Olympia is that the bill is now dead due to inaction by the House Rural Development, Agriculture, & Natural Resources Committee.

Despite there being no evidence that the coronavirus could impact our region’s water supply, the current situation does make many people think about regional emergencies, like a major earthquake, that could damage water infrastructure and force people to use bottled water.  Wouldn’t it be better for Washington citizens to have bottled water facilities in the state instead of being dependent on water being trucked in from other states? This question is especially relevant if these other states were also experiencing water shortages and their local authorities were stockpiling supplies for their residents.

In the current light, SB 6278 could have had dangerous outcome if it became law.  During public emergencies bottled water is often a critical necessity.  The outright banning of those who provide this product in Washington State is shortsighted and could have large scale negative consequences.

Maybe in some future large-scale local emergency, we will look back on the current coronavirus scare and be thankful it helped kill a bad bill from becoming law.