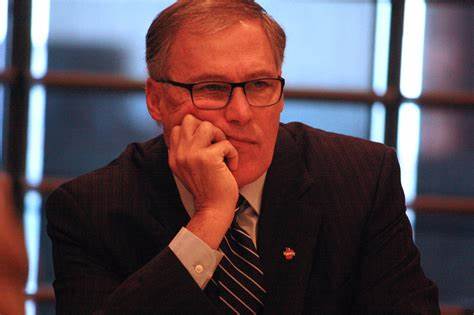 Flip-flopping Democrat Governor Jay Inslee is having a bout of decision paralysis over what to keep closed and what to re-open as the coronavirus crisis evolves. Inslee claims that science is driving his decision process, but it’s difficult to see through the mist of his political rhetoric any real numbers supporting that claim.

There are so many inconsistencies in Inslee’s latest set of decrees that there isn’t space to list them all, but here are some of the more outrageous Jay ‘Science Based’ Inslee decisions.

Start with fishing as an example, which many Washingtonians would like to do. Fishing re-opens on May 5th, unless you want to fish for halibut or go shrimping. I suppose if you are a shrimp that sounds like a great plan, but if you are salmon you had better watch out. You must fish six feet from anyone else, unless it’s a fishing event, in which case you have to stay home.

Camping is a tough one for Jay. If you are homeless, you can camp wherever you want, but if you want to get out of the house for the weekend and camp on state lands – that’s forbidden.

You can now continue work on building the home that you started before the shutdown. Washington was originally the only state in the West that that prohibited such private-sector activity, but it’s now allowed after immense pressure from Jay’s donors. Don’t try and start building a new home though, that still isn’t allowed.

Fancy a round of golf? Now you can, but only with one friend who is not from your family. Maybe that means an 18-hole round requires 18 different friends, one for each hole? Don’t try and ride in a golf cart with anyone else though, the golf police will come after you.

You can buy pot, it’s essential under Inslee’s rule, but don’t try and buy a pot-inspired shirt from a retailer, that’s still a no-no. Incidentally, someone needs to ask Jay why pot stores are essential today, when they didn’t even exist before he was elected a few years back.

You can drive to work no matter how far it is to go, as long as your job is considered essential. If you want to drive for any other reason, the location better be close to home.

All of these examples demonstrate the hypocrisy in Jays ‘science based’ decision process. There are no fundamental differences between the examples given above. They are either safe or they are not.

Shift – and a growing number of Washingtonians – challenge Governor Inslee to explain the science behind his thinking for these and his other decisions. It’s not enough to say you are using data to keep us safe, you have to show the public the data and why it supports a descision so they can understand when your rules can be safely removed.

Washington residents are ready to hear real, science-based reasoning that supports safely opening up business, recreational activities, schools, and other facilities. What we have seen so far, however, is political hyperbole and payback for donors, justified by colorful meaningless graphs and spreadsheets which fail to include any actual data..

Other states like Colorado, that are relaxing restrictions safely using science, will see themselves climb out of the economic nightmare much sooner than Washington. They are focusing on safety standards that apply across industries equally. The assumption is that if you can meet the standard, you can re-open.

It’s time to use a similar standard, consistently, across the board for Washington too. That’s a science we could all get behind.

In absence of being transparent about the data, some might conclude that ‘Be safe and wash your hands’ is the only sensible scientific thing heard from the governor last week.