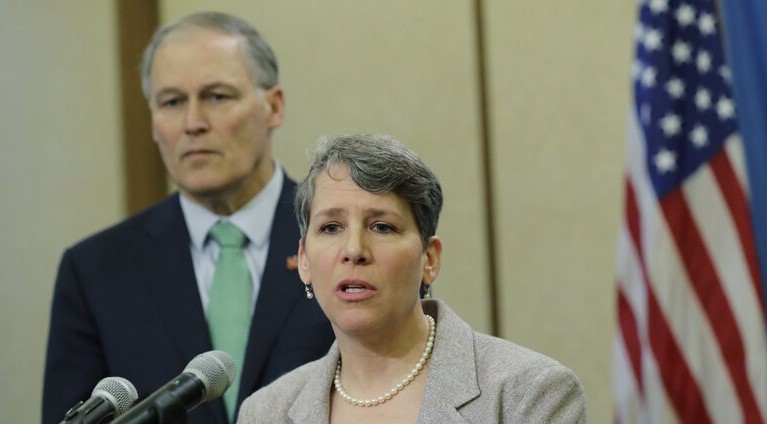 While Washington State’s unemployment system lies in complete shambles, Democrat fundraiser and current Employment Security Department (ESD) Commissioner Suzi LeVine would rather make jokes than actually fix the mess that she is responsible for. During a webinar on June 4, LeVine hummed the theme tune to the gameshow Jeopardy and made jokes about being on mute while staff attempted to fix the technical issues on the call.

The irony was not lost on many of the viewers. The ESD so-called customer service center has been plagued with long hold times, disconnects, and an inability to reach a life person in the department.

Even a webinar doesn’t work correctly under LeVine’s watch.

The remaining time on the webinar was spent describing why hundreds of thousands of unemployed Washington residents still haven’t received any unemployment benefits and LeVine explaining, unconvincingly, to the press what a great job her and Jay Inslee’s ESD is doing.

If you only watched today’s broadcast, you would think the website was running smoothly, claims were getting paid, and there are just a few technical glitches with some minor fraud (which is under control, of course).

When asked about the excuses being made for delayed payments, LeVine stated they were not making excuses, just giving a ‘description’ of what the department is doing. For those applicants trying to get the benefits they are entitled to, this reinforces the disconnected attitude that the state has taken during the coronavirus crisis.

Unfortunately, Inslee’s handpicked “leaders” at ESD are in full spin doctor mode. When politicians start redefining terms, trouble is on the horizon. Just ask one famous President about the word ‘is’.

Reporter Hana Kim from Q13 Fox pushed back on the assertion that claims were taking 1-2 days to process. Kim has heard multiple stories of claims taking several weeks. In response, LeVine, instead of saying ESD would look into the problems and offer a solution, started spouting statistics about claim volumes and blamed the actual applicants for the failure in the system.

Unable to recognize the abject failure in her own leadership, LeVine is looking to put the blame on everyone but herself. She has been forced to admit that fraud was happening at her department before the coronavirus emergency hit in March. The question is then, if the problems existed before, why didn’t Commissioner LeVine deal with them earlier?

With the claims processing problems, the inability to manage the trust fund, and $650 million (at least) that Nigerian scammers stole from the fund LeVine has demonstrated a complete lack of competence to manage the department.

Its time, as Republican Senator Mark Schoesler recently said, “Sometimes people do the honorable thing and resign. And that might be the best.”

Ultimately the buck stops with Governor Inslee and he needs to accept responsibility for LeVine’s failure. Inslee, who appointed Commissioner LeVine in 2018, has yet to offer any real solutions to the problems in his administration.

Inslee has, however, proven during the coronavirus crisis that he is good at destroying jobs and creating unemployment. He should not hesitate to create one more unemployed person, Commissioner LeVine.

Maybe when LeVine is unemployed and having to file for unemployment she will finally understand how bad things are.