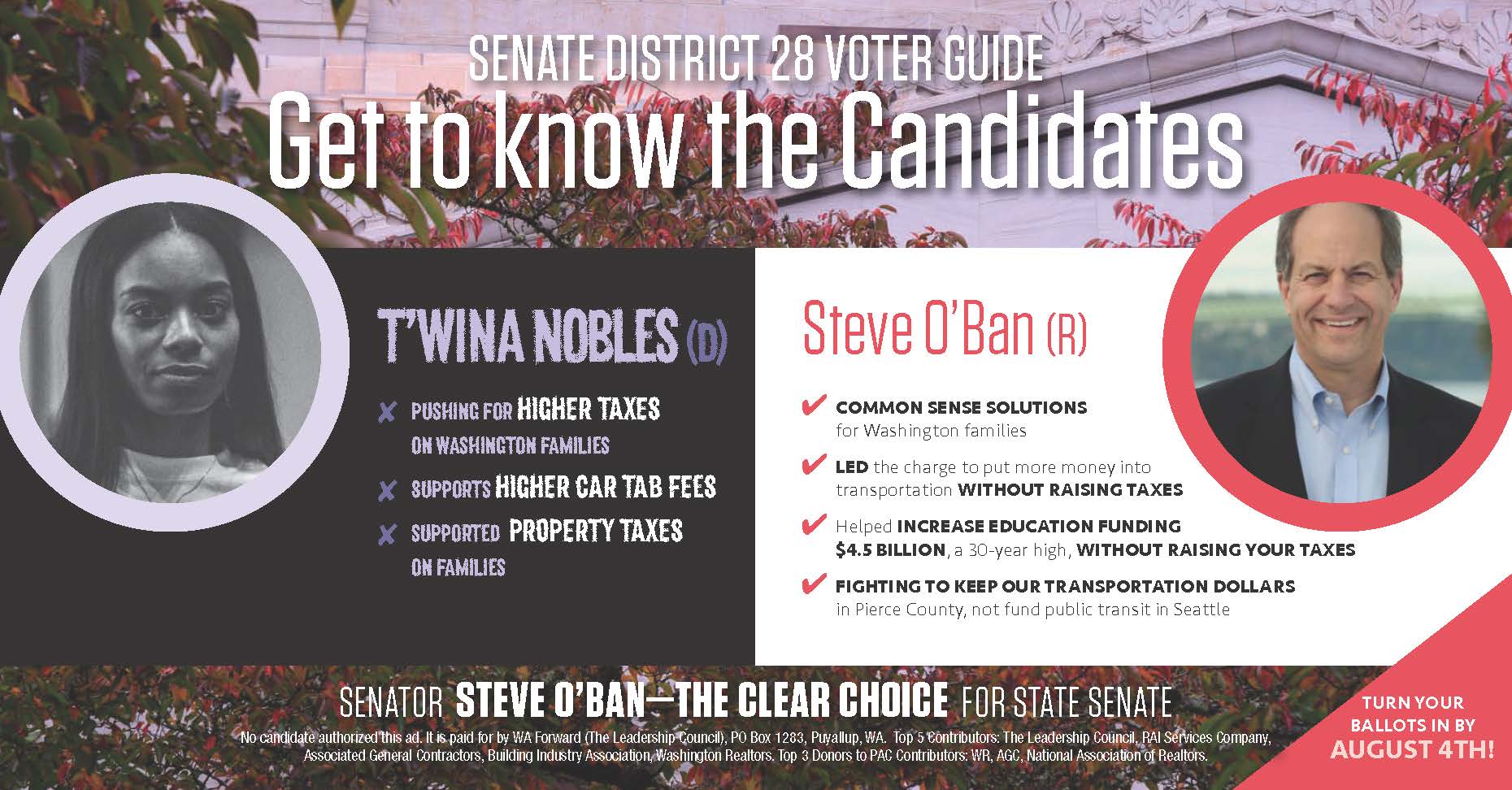 Local NPR affiliate KUOW published an article last week titled “Who takes responsibility for a racist political ad?” addressing a controversial independent expenditure mailer sent by WA Forward PAC leading up to the August Primary Election. The mailer was a contrast piece between Republican Senator Steve O’Ban and his opponent Democrat T’wina Nobles, a member of the University Place School Board.

Shortly after the mailer hit mailboxes, allegations were made that the photo of Nobles, who is black, was not only presented in black and white but also intentionally manipulated to darken her complexion. 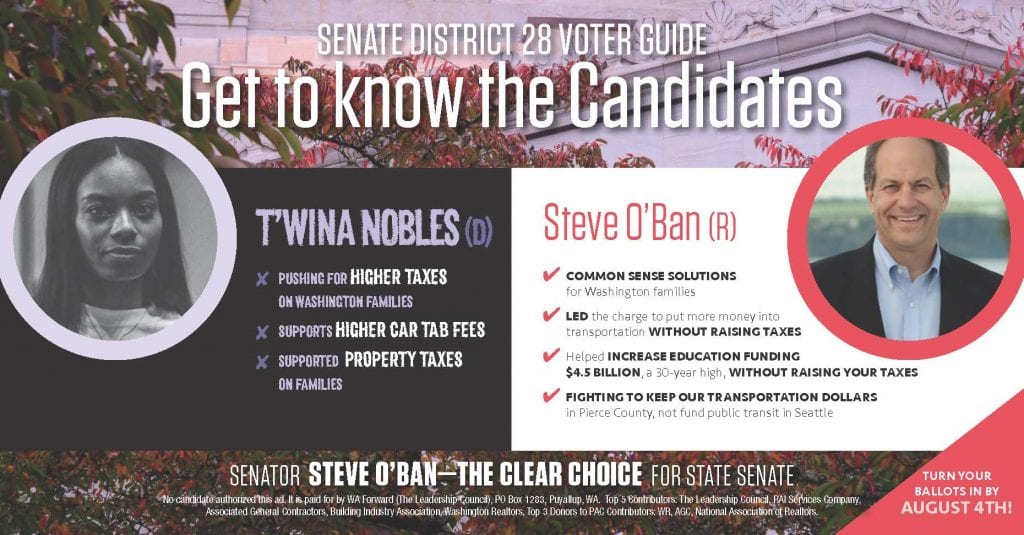 The company contracted by WA Forward to produce the mailer, DMM Media, provided Shift with a statement regarding these allegations and others made by KUOW in the article:

Second, WA Forward did not lighten or darken any photos. The photos were cropped to frame as equal-sized headshots and changed one to black and white, just as both Democrats and Republicans have done on campaigns in this state for decades. Both photos were publicly available – photo of Steve O’Ban from the Senator’s campaign website, and the photo of T’wina Nobles from her Facebook page. It is evident that the photograph of Nobles was not darkened.

Original photo beside the image from the mailer (Facebook, 5/31/20)

Additionally, the original claim that the photo was darkened was fabricated by Evelyn Fielding Lopez, who also claimed the mailer “lightened the skin of the candidate it supports.” Clearly there was no attempts to lighten the photo. (Twitter, 7/18/20)

Further, the article uses the photograph from Evelyn Fielding Lopez’s Twitter account without crediting her as the creator of the image, instead misattributing the image to WA Forward and DMM Media. The images from Twitter and the article are identical, and it is clear the photograph of the mailer was taken in poor lighting. Whether intentional or accidental, this distorts the image to make the photographs appear altered. 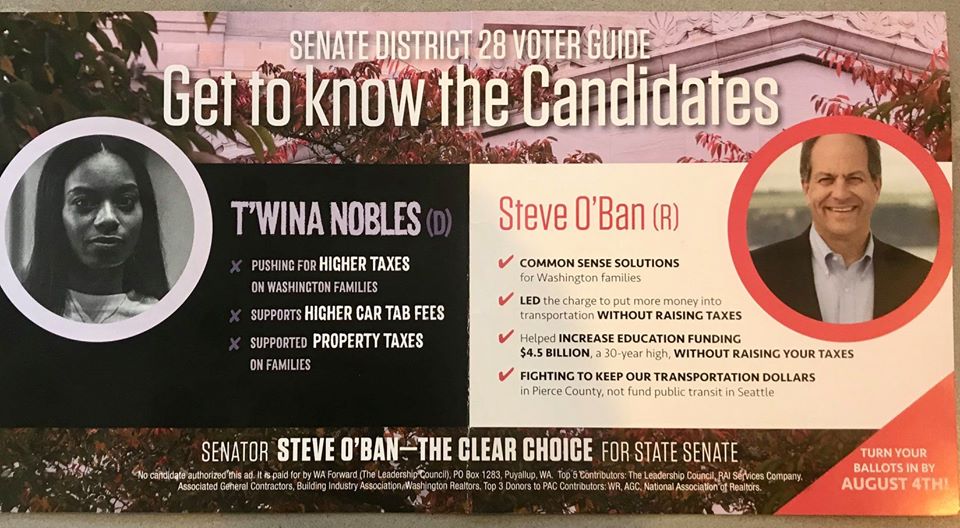 Finally, the use of black and white images is common practice by both political parties. A cursory examination of Facebook ads from the Washington State Democratic Party shows that they have also used black and white photographs of candidates. The Democratic party also appears to have used photographs that make the candidate they opposed seem darker, while making the candidate they support appear lighter, the very false claim made against the mailer of T’wina Nobles.

Shift would also like to note that New Direction PAC (which is funded by the Teachers’ Union, the State Employees’ Union, SEIU, and the PACs for the House & Senate Democrats) used what appears to be Lopez’s photo of the mailer on a hit piece against Sen. O’Ban where they doctored it further to make Nobles’ skin look significantly darker. It seems to us that if Democrats were truly outraged, they wouldn’t continue to spread a mailer that they viewed as racist and certainly not a version that was clearly doctored to exacerbate the issue they were expressing outrage about. 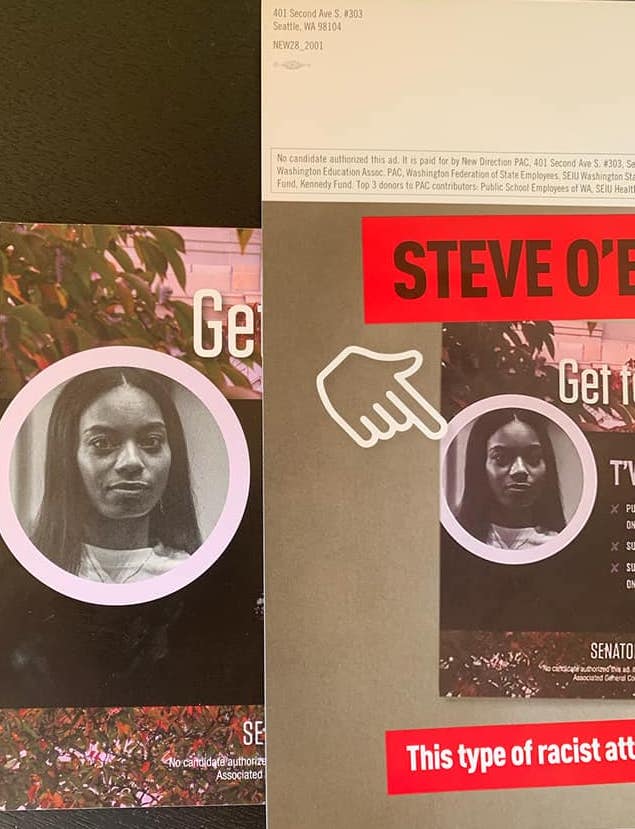