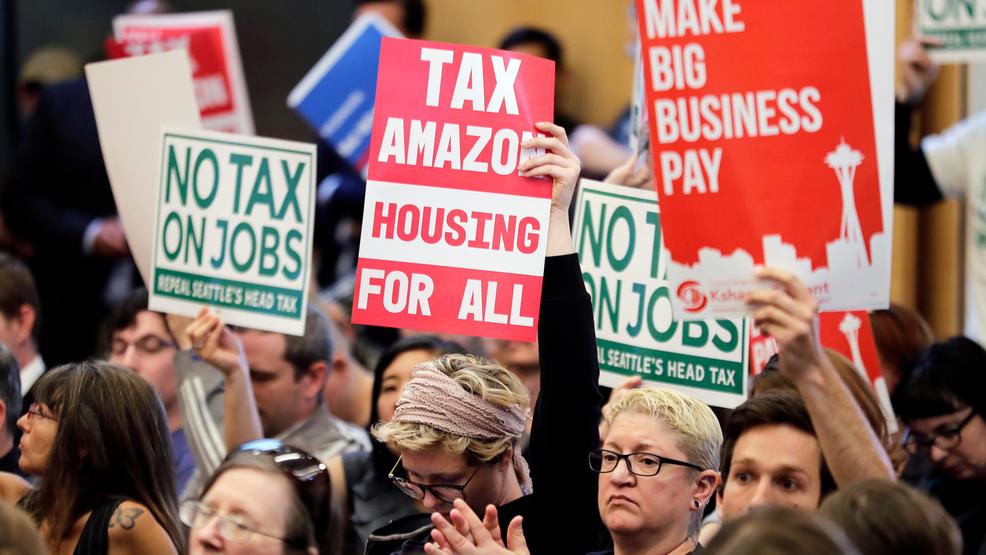 Give Kshama Sawant one thing: The Seattle city councilmember and Socialist Alternative leader might be wrong on just about everything, but she shares her wrong-headed opinions with a confident stridency.

The same can’t be said of her Seattle city council colleagues, who earlier this week sounded mealy-mouthed, whiny, and full of excuses while repealing the jobs tax, aka the head tax. The reversal was a stunner, coming less than a month after the council passed its jobs tax 9-0 and Mayor Jenny Durkan, who never sounded too enthusiastic about it, signed it into law.

Don’t get us wrong, the council majority – it was a 7-2 vote – did the right thing in repealing the head tax after running into a buzzsaw of opposition. But they couldn’t do it without coming across as complaining and confused while setting fire to a whole field full of straw men.

Competing protesters packed the council chambers Tuesday, creating a rollicking atmosphere that the term “raucous” does not do justice. Jobs tax opponents wanted the thing finished off, while advocates were stunned and angry that the city council was reversing course. Sawant’s allies made their opinions known, loudly.

But while the vote itself was drowned out in noise, councilmembers beforehand sought to explain why they were repealing the policy they had just enacted. Really, they were seeking to placate the angry mob, with an implied “please don’t come after us in next year’s election.”

So they trotted out their bogeymen that surely are the real reason the jobs tax must, reluctantly and sadly, be repealed (“please don’t be mad at us”). Their tone was reminiscent of an excuse-making parent explaining that, hey, this thing is out of our hands, but I wish it were different, buddy.

Gullible voters and evil businesses are to blame

Enemy #1 was those big, bad businesses who duped the people! Councilmember Lisa Herbold’s theory: “The Chamber of Commerce has convinced the vast majority of Seattleites of the old, conservative trope that the increased level of human suffering in this city is caused by government inefficiency.”

But that’s the whole idea of the straw man argument. Rather than grapple with the argument your opponents are actually making, just make one up! That’s way more fun, and then you get to hit back at it however you want. Of course, Herbold’s argument hits back at you, too – after all, you fell for that “old, conservative trope” – you must be pretty gullible.

The enemy has a name: Bezos

For Kshama “Jeff Bezos is our enemy” Sawant, one of two no votes on repeal, a “tsunami of propaganda, lies and distortions” by the business community was the problem – but what the “lies” were, Sawant never said.

Councilmember Lorena Gonzalez, who voted to repeal, blamed Big Business too. “I am deeply troubled and disappointed by the political tactics utilized by a powerful faction of corporations that seem to prioritize corporations over people,” she said.

But there’s a big, whopping flaw in this whole “big business turned the voters against the head tax” narrative: Other than putting out signature gatherers for the repeal campaign, the No campaign didn’t message to voters.

It didn’t run TV ads, or send mailers, or fund a big advertising campaign of any kind. So how, exactly, did Amazon, the Chamber of Commerce, Bezos et al dupe the voters?

All they saw was news coverage of a controversial topic that had been slow-burning for months. That’s called losing a debate, not the great unwashed masses being hornswoggled. Q13’s Brandi Kruse called this silly theory out. The outreach campaign hadn’t even started yet.

The truth of why the jobs tax failed isn’t acceptable to Seattle’s city council, even to the members who voted for repeal. It wasn’t a conspiracy, or a snowjob. The jobs tax failed because it was UNPOPULAR – in fact, it was unpopular BEFORE THE REFERENDUM CAMPAIGN EVEN STARTED.

Voters weren’t duped by Big Business and the referendum campaign, and they didn’t just recently become skeptical of the City’s homelessness approach. All of this predated the jobs tax vote, referendum signature gathering, and the council’s repeal.

The jobs tax failed because – say it with us now – IT WAS REALLY UNPOPULAR. But Seattle city councilmembers live in a City Government Bubble where they mostly hear from activist groups. Councilmembers got a lesson: Even in this ultra-liberal city, the organized activist groups are not representative of voters as a whole.