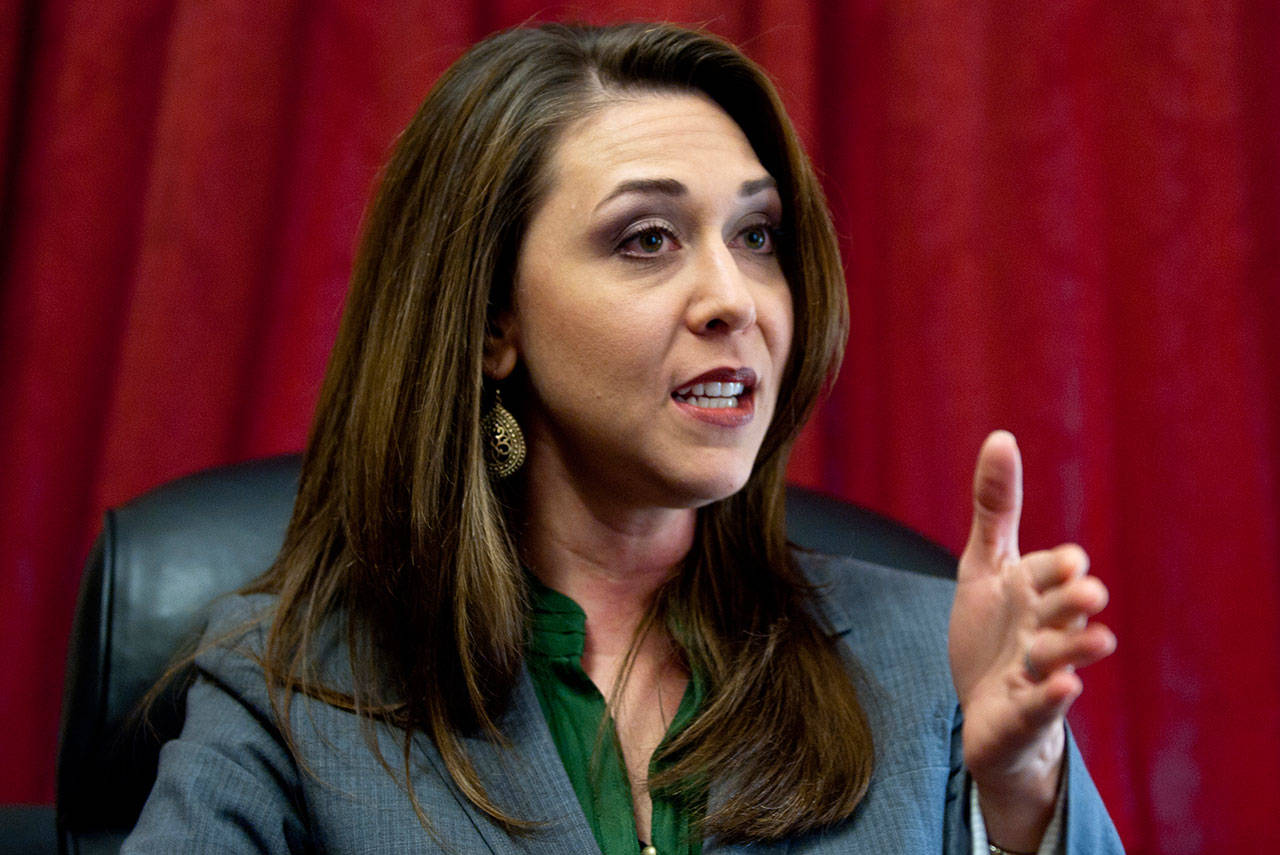 3rd District U.S. Representative Jaime Herrera Beutler (R-Camas) shares with Shift readers her views on the federal COVID-19 response and provides us with updates on a couple of the significant issues she is working on for Southwest Washington.  The Congresswoman discuss her efforts to help small businesses during the coronavirus outbreak and why she opposed Nancy Pelosi’s $3 trillion dollar “wish list” package.  Herrera Beutler also updates us on her efforts to increase the region’s salmon population, the I-5 Columbia River bridge, and maternity health.  We start by asking the representative a couple of questions about the 2020 campaign and the Washington State Democrats’ “desperate” attacks on her.

1) Filing for office happened last week in Washington State.  It appears you will likely face the same opponent you defeated in 2018.  How do you view your 2020 campaign?

In the last three months, instead of the normal election year parades and political events, my weekends and evenings are spent on the phone taking inventory from local hospitals who need masks and gowns, with businesses owners trying to navigate the various Small Business Administration programs, and with officials from the local level on up to the Vice President who are managing this crisis. And that’s fine. I’m approaching this election the same way I always do, which is to work as hard as I can to solve problems for the people I serve. Doing my job effectively is the best way for me to earn citizens’ votes.

2) What are your thoughts on the constant stream of attacks against you from State Democrat Party Chair Tina Podlodowski as she attempts to get Seattle special interest groups to spend even more money in the 3rd Congressional race?

Trying to guess how a bunch of things I have no control over are going to shake out is a great way to drive myself crazy.  So I just don’t do it.  I run my own race on my own record, and people here know me.  And it’s easier to not worry about the attacks when they’re all the typical bogus partisan garbage. The nonsense they’re throwing our way tells me that they’re getting increasingly desperate.

3) The Democrats have proposed another $3 trillion dollar package in response to the coronavirus outbreak.  What do you believe Congress and the federal government should do next to restart our economy?

Americans deserve much better than the recent funding package that Pelosi shoved through the House that contains no new funding for the Paycheck Protection Program to help small businesses, and that the Senate has said is dead on arrival. This package also contained a long list of unrelated policy items, like releasing violent felons from prison, and giving multi-billion dollar bailouts to cities like Chicago that had been mismanaging their budgets for years.  We can do much better, and I believe it’s time that Congress takes bipartisan action to provide more economic relief targeted to small businesses and local communities that have been directly impacted by COVID and the stay home orders. I was a champion for creating the Paycheck Protection Program that has assisted thousands of small businesses during this crisis, and I’ve also introduced bipartisan legislation to make sure it has the funding it needs to continue providing loans to employers who need it, and giving flexibility with some of the guidelines that are creating challenges for certain businesses.  The more we can do to keep them above water financially, the quicker they’ll be able to open their doors, return to work and thrive independent of government.

4) You have spent considerable time working on the complex issues surrounding sea lions in the Columbia River.  Can you provide us with an update on your efforts and what are the next steps?

I was happy that my bill to significantly increase the lethal removal of sea lions on the Columbia River was passed and signed into law by the president.  We just learned that federal agencies are working to make a determination on the permits to remove more sea lions by fall – which is a reasonable timeline, especially in the midst of all the delays caused by the COVID pandemic.   We’re also seeing some encouraging news out of the Upper Willamette River, where sea lion removal has greatly improved winter steelhead numbers, and I’m hopeful that we’ll see similar results on the Columbia River once my bill is fully implemented.  I was also able to secure support for increased salmon hatchery production, which will obviously help increase salmon numbers.  So, there are a lot of promising developments in my efforts to bring back our native salmon and steelhead.

5) Another complex issue that has many stakeholders is the building of a new I-5 bridge across the Columbia River. As you work on this issue, what are your primary goals?

We do need to address the I-5 bridge across the Columbia River with the goal of reducing congestion and increasing throughput for goods – after all, this is the major artery from Canada to Mexico.  But we need to do it in a way that meets the needs of Southwest Washington and come up with a plan that is both supported by this region and is something we can afford.  The deeply flawed Columbia River Crossing project failed a few years ago because project sponsors were using the bridge replacement to force a light rail project and countless pieces of expensive and unrelated pork – a bus facility in Gresham, Oregon and a museum among them – that folks here couldn’t afford and didn’t want.

One potential major hurdle to successfully addressing the I-5 bridge is that the state of Oregon, totally separate from this I-5 bridge effort, has been steadily pursuing a plan to toll Washington commuters right as they cross the river on both I-5 and I-205. It’s important to clarify that these particular tolls won’t be used to pay for new bridges. These are “congestion pricing” tolls, meant to force people out of their cars. I strongly oppose them because Southwest Washington residents, who are the majority of commuters on the bridge, would be paying these tolls, while the money would be diverted to other projects in Oregon – not the bridge.

Addressing the I-5 bridge has tremendous potential – and citizens can count on me to remain engaged, both as an advocate and watchdog.

6) You are recognized as a congressional leader on maternal and child health.  What are the current issues the Maternity Care Caucus is working on to help young families?

As a mom of three young children, I’ve worked to help solve a host of challenges that moms in America face today.   A little over a year ago, my bipartisan bill, the Preventing Maternal Deaths Act was signed into law by the president. This bill represented the first congressional response to the maternal mortality crisis in America.       Our nation faces the very unfortunate distinction as the only developed nation in the world where the rate of maternal deaths is actually increasing – and many of these deaths are preventable.

More recently I introduced two other bills: the Maternal Health Quality Act and the Helping MOMS Act.  The Maternal Health Quality Act improves tele-health access for moms so it’s easy to communicate with medical professionals, even from rural parts of our state.  The Helping MOMS Act ensures new moms can access health services for one year after giving birth, which is when they’re most at risk of encountering life-threatening complications.